With the Water Year ending last September, this is a look at the Los Angeles Aqueduct supplies from 1975 to 2015. Most of the hard reductions were due to Courts ordering the LADWP to permanently release water back into the Mono and Owens Basins between 1985 and 2007 . The last three years have been due primarily to the State's drought. Hopefully that will rebound back to the new normal of 210,000 to 220,000 AF levels over the next year or two. 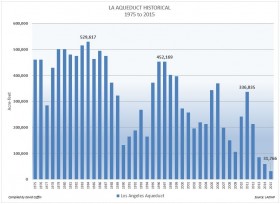