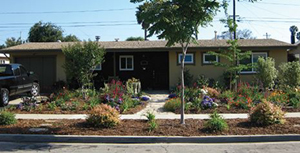 Posted In Opinion | Water Facts
Tagged In density | Drought | Multi Family Residential | Paper water | Single Family Residential
This graph shows the City of Los Angeles's history of 'paper water' since 1990 and the actual amount of water it has been able to obtain. Paper water is the gap between what the city anticipated it would need for it future growth versus the amount of water it actually received. The projections appear in the city's Urban Water Management Plan (UWMP) which is published and approved by the city council every five years. The city uses paper water along with real water to demonstrate that it has sufficient water supplies for the thousands of medium and high density projects going through the planning process. As time goes by however the city has not been able to access that water which has created a severe deficit resulting in a drought. Despite not having access to this water, each new water plan continues to anticipate levels of water supplies that it clearly has no access to. Residents caught in the middle of this vicious drought/growth cycle and have been forced pay for this policy with higher utility prices, enforcement actions, and lower property values.
Posted In Uncategorized
Tagged In density | Drought | Los Angeles | Paper water | planning