LADWP water plans are generally more about perception than results and 'Purple Pipe' is certainly the poster child proving that.

Purple pipe is used to distribute non-potable recycled water and is often presented as one of the departments cornerstone resources to meeting the city's water supply demand since it frees up potable water that would have been used for irrigation or industrial use. Thumb through many of the DWP’s presentations and you'll find impressive glossy photos of purple pipe that suggest that it's been making big contributions to increasing the City of Los Angeles water supply. Even the Mayor and the city’s neighborhood councils are lulled into this group think. 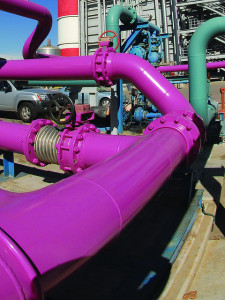 However when perception meets gritty reality, purple pipes contribution to the city's water supply is simply underwhelming and not deserving of so much attention. Past LADWP water plans told us recycled water was supposed to deliver be delivering ~30,000 Af/y to the city by 2015. But instead the city's been getting an average of only 7,600 Af/y.

There are several reasons for this shortfall, the biggest being the same reason the city isn’t able to effectively replace its aging water mains. The immense cost of such an effort and the disruptive nature of digging up thousands of miles of city streets in a city that is already built out and paved over is prohibitive. The department says it would take 300 years to replace its crumbling water mains. Building a distribution network of purple pipe runs into the same problems of cost and disruption.

This leaves the department to choose routes where it can get the most bang for its buck. Generally this means it has to be a customer who can use lots of recycled water and is relatively near by the filtering plant. In the city's west side for example, only a few customers like LAX, Westchester Golf Course, Loyola Marymount and Playa Vista fall into that category.

Sure it would be nice to have purple pipe running alongside the city's water mains that finally connects up to every large commercial and residential complex but that's not going to happen. 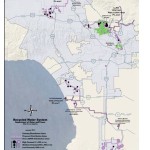 The other reason for the lack of progress is that recycled water is primarily for irrigation and industrial use. In the 1980's the city's industrial use was ~30,000 Af/y but overtime this has fallen to an average of just 19,000 Af/y. The rest would go to city parks, golf courses and new commercial/residential developments that are close enough to filtering plants that makes it economically viable to tear out a few streets and lay new purple pipe.