Water supply assessments for two large projects have been approved by the LADWP water resource planners and is coming to the City of Los Angeles Board of Water and Power Commissioners on June 2 for approval.

The LADWP cites its own 2010 UWMP claiming there is sufficient water for these two projects through the year 2035, and enough for all other "existing and planned future demands". 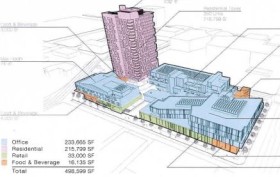 Given the bad news the entire state has been dealt with over the last three years and the city is begging residents to rip out turf in an effort to conserve, it would be understandable if you thought that the city wasn't quite meeting its water supply targets. You would of course be right to think that.

The problem with the assessments for these projects is that since the approval of the 2010 water plan, the DWP's total water supply has averaged just 550,887 Af/y which 10% a year short of what it needs to meet the city's needs. When we look at the categories that make up the supply we find that the recycled water supply is short of its 20,000 Af/y by 84% at just 7,392 Af/y. Groundwater to date is ahead of the 2010 projection by 60% but is unlikely to meet 2020 through 2035 annual projections due to its cyclical nature. The 2010 UWMP plan also cites 40,000 Af/y of transfers for which there is no evidence of receiving and it counts 14,180 Af/y of 'conservation' as new water which it is not.

The 2010 UWMP is stuffed full of water that simply can't be accessed and is plainly 'paper water'.

How the Board of Water and Power Commissioners can approve these projects with a straight face given the severity of the drought is anyone's guess. The city appears to be in a 'state of denial' when it comes to the shortage as it approves these projects big and small. But it's also in a 'state of crisis' when it comes to prodding the public into conserving. It can't have it both ways.

Editors note: The DWP has not met any long term water projections outlined it its plans since 1990.