This is Part IV in a series describing L.A.’s water supply problems and the policies that produced it. 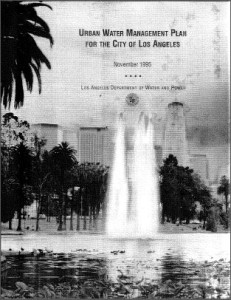 In Part III we saw how the city sought to maintain the 1985 baseline of ~175 gallons per capita daily in the 1990 UWMP while population estimates increased. As a result we saw the projected supply in the plan jump significantly from the previous plan. We also found that the DWP heavily leveraged the projected 1990 supply in the groundwater and recycled categories using water it had no chance of getting. These factors continued into the 1995-2000 UWMP's.

The 1995 UWMP - L.A.'s 3rd Water Plan
The 1995 UWMP should best be known by the city’s acquiescence that water supply had its limits. Population estimates from the Southern California Association of Governments (SCAG) did not climb as dramatically as they had in the 1990 plan but the increase from 3.85 million to 4.25 million by 2015 (9%) was still the driving factor.

With future growth estimates continuing to drive the supply requirement of more water, DWP planners were forced to set a new precedent by reducing the per capita supply from 177 gallons per capita to 150 gallons acknowledging that less water would be coming through the Los Angeles Aqueduct due to recent court ordered restrictions of Mono Basin water and at current allocations, future growth would have demanded ridiculously large amounts of water that couldn’t be met.

Historically though, reducing the per capita supply to 150 gallons per day per capita would not be enough. At this allocation the DWP suggested that it would have 695,000 Af/y by 2005 and could gradually increase that to 750,000 Af/y by 2015 (Figure 1). But in the years following the approval of the plan, the actual supply figures that came in would demonstrate the DWP's failure to achieve these projections suggesting that there was far too much paper water in the projections to be viable.

DWP planners accepted that less water was going to be available through the aqueduct system and reduced the aqueduct supply by 20,000 Af/y to 360,000 Af/y in the 1995 plan.

To offset the loss of aqueduct water, DWP planners suggested that they could increase the already large projections of the 1990 plans and increase the availability of recycled water to 38,000 Af/y, and groundwater to 152,000 Af/y.

Through the years though, none of these figures would ever be achieved. Recycled water averaged a mere 2,300 Af/y and groundwater averaged just 87,000 Af/y proving the plan wasn’t working.

The historical significance of the 1995 plan was that the DWP would only muster up an average of 638,490 Af/y (Figure 2). Far less than the 750,000 Af/y that it promised. Because of the paper water fueled growing deficit, the DWP would start prodding the public into reducing its demand using such schemes as tiered pricing, washer rebate programs and require that all homes install low-flow toilets before resale.

L.A.'s fourth water plan might best be known as having to largest projected supply that the DWP said it could meet of any of the city's UWMP's. This monster projection occurred even as the department further reduced the gallons per capita daily water supply. The reasons were due to estimated population projections supplied by SCAG.

The new SCAG population estimates started out at 4,035,305 by 2005 population and would grow to 4,856,887 by 2020. These new population figures when figured into the new per capita allocations created a demand that would skyrocket to almost 800,000 Af/y.

But the lower allocations would still generate a sharp rise in demand. The DWP said it could supply 718,000 Af/y of water in 2010 and sharply increase in to 799,000 Af/y by 2020. The increase though didn't come from increased recycle and groundwater.

Perhaps realizing that developing a recycled water system and pumping more groundwater was not paying the dividends they predicted earlier, the city ended its long standing resistance to relying on pricier MWD water and would ratchet up purchases of water from 200,000 to 298,650 Af/y which would nearly equal the aqueduct supply level.