The short answer to both is that in order to provide evidence of sufficient water supply for projected growth, the city’s UWMP (Urban Water Management Plan) has been reporting that is has far more water available to it than it can get. 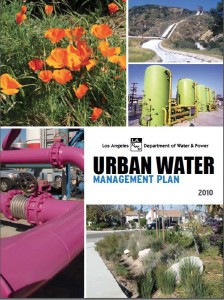 When DWP officials are asked why they haven’t met the projections cited in the UWMP, using a little spin they tell you that conservation efforts reduced demand and they didn't need to import as much as projected.

This routine answer however is disingenuous since the projections include future growth and clearly the DWP hasn’t met that expectation given today’s restrictions on water. The 1985 UWMP set the city’s baseline water at 175 to 176 gcpd (gallons per capita daily). This number reflected the current level of water to residents, businesses, and industry, it included various conservation programs such as low-flow hardware devices and left room for projected population growth to 3.41 million by 2010. At this level the city cited that it would be able to meet the demand with a very reachable water supply of 667,300 Af/y.

In 1990 however, the city’s population increased faster than the population projections that were cited in the earlier plan. Population projections in the new plan were now 14% higher and in order to maintain a similar per capita supply level and still meet projected growth, the plan’s total demand and supply projections jumped 13 percent to a not so believable 756,500 Af/y by 2010.

So now the city was confronted with two conflicting demands. The first would be to provide enough water from a now shrinking supply that once averaged 680,000 Af/y and has now fallen to just over 610,000 Af/y and still meet the city’s need. The second was to show that its supply was growing and that it would be sufficient for continued growth.

In an attempt to solve the first problem, the city’s 1995 water plan would have to ratchet down the per capita rate to 150 gallons per day to lower the total demand otherwise we would seen demand in excess of 875,000 Af/y. However even 150 gallons per day wouldn’t be enough over the short term and the city would also have to implement more draconian methods to lower the per capita further by imposing an Emergency Water Conservation order on single family residents and reducing residential billing unit allocations.

The second problem to show a growing water supply over the long term to meet the city’s growth ambitions would require a little sleight-of-hand by the DWP using ‘paper water’.

California’s water laws require that planning agencies, and developers show evidence of current and future water availability for their project. EIR’s and water supply assessments all rely on the projections cited in the UWMP so there is a great deal of pressure on the DWP to show that the water supply is growing, where the supplies are coming from and how much. If the water plans did not show evidence of future water availability that was sufficient to match population projections this could greatly hamper the approval of their projects and possibly stop them cold. In fact some cities in California today have stopped issuing water meters to new subdivisions for residential because they have no surplus of water.

Our first stop to find paper water is in the DWP’s groundwater projections that are cited in each of the UWMP’s approved by the city between 1990 and 2010. The accompanying groundwater chart shows us a 79,500 Af/y gap between what the DWP says it would have to meet the city’s growth and the actual amount of groundwater the DWP had access to.

Over 24 years this paper water would represent about 1,088,000 AF of water that the DWP said it would have to meet projected growth but over time it would never receive.

The city never stood much chance to meet these projections. Growth, fueled by paper water is at the center of blame. LAStormwater.org states that the city captures just 27,000 Af/y of storm water a year to recharge the underground storage. This low rate is attributed by ULARAwatermaster.com to the city’s built-out growth which has impeded the capture of groundwater because so much permeable soil is paved and built over. The Upper Los Angeles River Area Watermaster reports that most of today’s groundwater recharge comes primarily from LA Aqueduct and Metropolitan Water District imports. Further restricting groundwater pumping is that many wells were found to be contaminated in the mid 2000’s and had to be taken out of service.

Our next stop where we find paper water in is the DWP’s Recycled Water projections. Urban Water Management Plans between 1990 and 2005 all projected rapidly growing recycled water supplies that later would never be realized.

The Recycled Water chart shows a huge gap indicating that up to 91% of water supply the city claimed it would have access to for future growth is just paper water.

In one example the DWP projected in the 1990 UWMP that the city would have 32,800 Af/y of recycled water by the year 2010. This number like all projections would be used as evidence of future growth by planners. But this water would never be realized. The actual average reported yield between 1995 and 2010 was just 2,921 Af/y which was 29,879 Af/y below what was promised. This 91% deficit is our paper water.

Over 24 years this would represent at least 384,096 AF of paper water that the city said it had access to as evidence that it had sufficient supply for projected growth but it never received that water.

Oddly, the DWP’s latest 2010 plan appears to be doubling down on paper water by citing that it will have 59,000 Af/y available to it by 2035. Already it looks like the first milestone in 2010 of 20,000 Af/y will be missed by a large margin which further demonstrates how that L.A’s drought and growth are built on paper water.

The city owned aqueducts have been our primary source of water since 1913 but in recent years it has also become the UWMP’s largest contributor of paper water.

In this example, if we look at the 1995 UWMP, aqueduct water was projected to be 360,000 Af/y which included surpluses for future growth. But that water never came down the pipe. The actual total reported supply was just 217,258 AF/y between 2000 and 2014 was 142,274 Af/y below what was promised. This meant that 43% of the projected total was paper water.

Over 24 years this would represent at least 1,863,000 AF of paper water that the city said it had access to as evidence of a growing supply but it never received to this date.

It’s hard to describe MWD water as paper water since most of the DWP’s projections for MWD water were greatly under reported from what was actually received. Typically when the City of L.A. fell short of water which was most of the time, the MWD would step in to fill in as much missing supply as it could. But water is a zero-sum resource and if you take more than your share of water, you’re taking it from another agency. There are limits to what the MWD could supply and history suggests that 423,000 Af/y was L.A’s limit.

MWD water can be described as paper water because each of the city’s UWMP assures that any shortfall of city owned water would be made up by MWD water which is a promise that can’t be met. That is promise made to planners more than it is to the city’s residents.

This category is a new form of paper water that was just introduced in the 2010 UWMP. In past years, the term conservation applied to water supply that was already received by the city and the value attributed to it was measured by the reduced number of gallons per capita. As mentioned at the beginning of this article, the DWP originally allocated about 175 gallons per capita in the 1985 and 1990 water plans which includes residential, commercial, government and industrial uses. The city’s conservation programs since then have reduced this to 141 gallons per capita using primarily Tier pricing and low-flow hardware devises. More recently it included so-called “turf buy back” and enforcement measures. In its simplest terms, ‘conservation’ is the ability to stretch out a given supply.

The DWP in 2010 decided to turn this idea on top of its head and count conservation as a source of supply that adds to the city’s total supply. This appears to be another attempt to produce more water on the ‘books’, but water that in time will not be accessible. The 2010 UWMP appears to be suggesting that the city will receive 14,180 Af/y of new water by 2015 and up to 64,368 Af/y by 2035.

This is another new category to the UWMP. Transfers may also turn out to be another form of paper water since water transfers from other agencies is solely dependent on them having surplus water which is in doubt these days.

Most of the agencies the city could bargain with also depend on the SWP to supply them water. The SWP has been seriously cutting back allocations to their customers which includes the MWD.

The 2010 UWMP projects that it will receive 40,000 Af/y through the Neenach pumping station. Only time will tell if this is a viable and reliable source of water.

Overall the amount of water the city promised for future growth and did not meet is staggering. Each UWMP would follow a familar pattern. The first of the five year milestones would be adjusted relatively close to the current supply level and in the following 10, 15, and later milestone years, paper water would contribute to ‘unlikely to be reached’ levels of supply.

Over 24 years, this would represent 4,352,000 AF of paper water that the city said it had access to as evidence of a growing supply but it never received to this date.

From the standpoint of development and the planning department, paper water is a good thing because the EIR’s, WSA’s and smaller projects that fall below SB-221 reporting requirements can all be assured that whatever their demand is, it will “fall within the available and projected water supplies” over the 20 to 25 year scope of the plan they are citing. Whether the city falls into a permanent drought is irrelevant to the approval process but it has huge repercussions elsewhere since the unmet demands means that the water must be found elsewhere when conservation isn't enough. These demands might be met by fallowing farmlands in the South San Joaquin valley or eliminating their supplies altogether forcing them to drive wells deeper to meet their shortfalls.

From the standpoint of residents however, paper water means higher utility bills, lower tier allocations, and lower property values for the unlucky homeowners who have high density built behind their yards but worst of all, it means the city's water supply is no longer reliable.